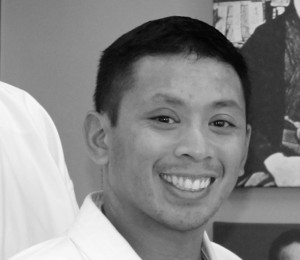 A student of martial arts since the age of ten, Sensei Jay started training in judo and kempo. In high school, he was a wrestler and developed a strong training ethic through the sport. It wasn’t until Sensei Jay was introduced to Shotokan Karate in 1994 that his passion really grew. Under the instruction of Sensei M. Bambouyani, Sensei Jay dedicated much of his time to training and teaching karate. He led the UIC Karate Club for many years and taught in other colleges and community centers—often training two to three times per day, five days per week. Over the years, Sensei Jay has competed among the world’s top karatekas in kata (forms) and kumite (sparring) events, and has received numerous awards.

Through training and competing around the country, Sensei Jay has built a strong network of friends and fellow Shotokan practitioners that provide him, and the Enso dojo, opportunities for training and competition. As a host of traditional karate seminars, he has welcomed many instructors from around the world to share their experience and knowledge with Enso students. As Head Coach of the Enso Elite Karate Team, Sensei Jay works with Enso Elite Coaches, athletes, families to build a strong team that can compete at local, national, and international levels.

Sensei Jay is also a tremendously dedicated instructor. In his classes, Sensei Jay believes it is important to pay close attention to the individual needs of every student, while also encouraging a supportive, energetic, and disciplined training environment for the whole group.

Sensei Jay holds a B.S. degree in Kinesiology from the University of Illinois at Chicago (UIC) and a Master’s degree in the same department. At UIC, his studies focused on Urban Youth Development and martial arts. Jay has also taught courses at UIC and Triton College.

With his wife, Sensei Denise Nacu, he has been leading the Enso Karate program since 2002. From a small 750-square-foot training floor to a 6,000-square-foot facility in downtown Chicago, the dojo is now home to over 200 students and families who are dedicated to improving themselves and learning the art of Shotokan Karate.  They have two school-age children who also train, compete, and assist at the dojo.