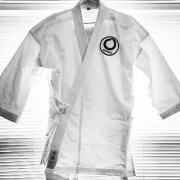 The very essence of karate and, perhaps the main purpose of training, is to improve oneself. Gichin Funakoshi, founder of Shotokan karate, stressed that practitioners must strive to seek perfection of character. In doing so, it is essential to obtain a clear, focused mind in pursuit of a mental and physical state that is harnessed for perfection. When learning karate, particularly as it involves both physical and mental tasks, one must first start with the mindset of discipline. Attending to the work of the mind may not come naturally at first, but with discipline and practice, it can be utilized both in and out of the dojo.

When training, it is useful for a practitioner to continually reset their mind by clearing it from any past or future thoughts. With practice, tuning into a present awareness will become natural. Setting and being mindful of one’s goals is also fundamental to success. Not adhering to your goals is much like riding a bicycle in tiny circles to get to your destination. When away from the dojo, practitioners are encouraged to apply the mental aspects of karate to their own personal challenges in life. In this way, mental training occurs seamlessly with the physical demands of karate as it permeates all areas of one’s life.

Mind-body connections also aid in the progression of building muscle memory in addition to learning sensory motor movements essential to karate. It takes both the mind and body to develop a strong and present awareness in order to optimally enhance the structured sequence of movements in karate called kata. Of course, it is also essential to obtain good teachers to model these movements, provide feedback, and help the student reach their goals. The mind, at a fundamental level, adds to the vigor and spirit of each movement that the body is directed to perform. Anyone, with enough practice, can go through the motions, but it’s through these mental connections that one can become the greatest among the great.

Occasionally, a martial artist may arrive at a plateau in training where they feel they aren’t gaining or excelling or they are faced with greater challenges or even an injury. Our minds are powerful and can lead us to believe we are stuck when, in fact, the very act of attending a class or performing visualization is beneficial to the practitioner. One can envision and practice the various forms in karate while paying attention to their breathing without physically performing them. This is why it is essential to tap into a focused mindset. It helps you to use the strength of the mind to breakthrough and identify any potential barriers. One way this can be accomplished is by resetting the mind, thereby clearing any exterior distractions, past and present, in an effort to obtain a blank slate or tabula rasa, thereby forgiving the self of any extraneous events of the day. Another method is to simply check in with oneself, asking “Where am I with my kata, stances, or flow?” followed by “Where do I want to go with my kata, stances, or flow.” Then, visualize the steps and envision accomplishing them in progression and with success. The idea is to reset the mind continually throughout your training in an effort to optimize learning the skills without distraction, thereby gaining a thorough and new perspective of the areas in which to work.

With mindfulness, karate-kas can complete tasks that involve mental acuity with more fervor. It helps in a way that focus and concentration cannot by themselves. The reason is that mindfulness works a step further, utilizing both the unconscious and conscious minds. Using the unconscious mind is a bit like adding water to a reservoir one drop at a time to fill the cup when it’s most needed. Mindfulness attends to present moments,
particularly when the goal is to remain focused with optimal attention to learning forms and detail. Renowned mindfulness expert Jon Kabat-Zinn speaks to it as “paying attention on purpose, in the present moment, without judgment.” In training, it comes down to looking inward to explore the mental strength to perform the physical movements while focusing on areas to improve. It is not about criticizing, but rather finding ways to grow. The methods utilized may vary from sitting silently in zazen while aware of one’s breathing to practicing walking meditation or silent meditation on a daily basis. The idea is to practice using the mind regularly in and out of the dojo with as much frequency and integrity as you practice using your body. Ultimately, the hope is that when the mind and body are in tune, one can achieve optimal states of mental and physical awareness in order to demonstrate their own perfection of character and love for karate.

Dr. E. Cruz Eusebio is a 2nd Kyu student in Shotokan Karate at Enso. He is an assistant professor of psychology at The Chicago School of Professional Psychology where he serves as director of the Center for Optimal Performance in Education. He has published, presented, and been interviewed by the media on various topics of child and adolescent psychology, education, technology, and neuroscience. His current focus is on the correlation between mind-body mechanics, optimal experience, and a practice he calls proflection, the art of manifesting positive change. 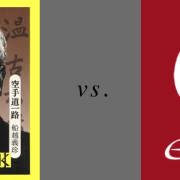 When preparing for my black belt exam, I re-read Gichin Funakoshi’s auto-biography, “Karate-Do: My Way of Life.” This fun, short book includes snippets of karate history as well as a window into Master Funakoshi’s remarkable life, following his karate journey from Okinawa in the 1860s to the United States in the 1940s. As I read, I couldn’t help but see corollaries between Master Funakoshi’s training and the training students receive at the Enso Karate dojo today. While I’d never be so arrogant as to compare our skills to his, or our modern struggles to the hard life he led, I found comfort in the fact that the essence of karate remained despite the distance of years and cultures. Here are some of my observations.

1. Late nights. When Funakoshi was a student, practicing karate was forbidden and therefore conducted in secret. These clandestine classes were held very late at night and very far from Funakoshi’s home. He recalls: “Once my enthusiasm for the art began to take hold, I never found that nighttime walk too long.” In some ways, Enso’s late-night classes are the modern equivalent of his experience. Before I embraced karate, I could not have imagined getting home at 9:30-10 p.m. several nights per week. Now I love that

trek home – high on exercise endorphins, enjoying the company of my classmates as the cool night air hits our sticky bodies.

2. Different sides of sensei. Funakoshi noted that after practice ended, his Sensei Azato would “become a different kind of teacher … theorizing about the essence of karate or, like a kindly parent, questioning me about my life.” Certainly all of us at Enso have experienced this with various sensei and sempai, especially with Sensei Jay, who truly cares about seeing his students succeed on and off the dojo floor.

3. Learning from the greats. During times when Funakoshi trained with two masters, Sensei Azato and Sensei Itosu, he would “listen most attentively to the discussions between the two, and by doing so learned a great deal about the art.” How many of us have witnessed friendly debates between Enso’s senseis? And how many of us have attended one of Enso’s regular seminars, welcoming the greats from around the region and around the world? Enso truly brings this spirit of “learning from all the masters” to our dojo.

4. Being asked stupid questions about karate. As Funakoshi said: “A man who is relatively unfamiliar with the art may say to an adept: ‘I understand you practice karate. Tell me, can you really shatter a huge rock with your fingers? Can you really make a hole in a man’s belly with them?’” I can say for certain that every time someone learns that I do karate, they ask me how many boards I can break with my bare hands. It’s apparently been an annoyance for over 100 years!

5. Teachers who are great at other stuff. Funakoshi noted that his master Azato was a highly skilled fencer as well as a politically astute man. He was astonished that someone who was such a master at karate could also be such a master at so many other things. This, too, is clearly seen in the Enso community. Look at Sensei Denise, who is a Ph.D. professor, amazing designer, and decent piano player, not to mention a phenomenal mom! Enso also relies on its network of students and instructors to help keep the non-karate aspects of the dojo running – Sensei Chris’ legal expertise, Judie’s awesome design skills, Elaine’s amazing organizing abilities, etc.

6. Growth. Funakoshi saw hockey-stick-like growth in karate’s popularity in Japan. What began as a forbidden practice conducted on the Okinawan islands, to its first introduction in Tokyo in the 1920s, to its inclusion by the Japanese education department at all schools nationwide, and then to its introduction to the U.S. Air Force at the end of World War II. While I have only been an Enso student for 5 of the 12 years it has existed, I know enough from senseis’ stories that we have grown quite significantly – from just a couple dozen students learning from Sensei Jay at the Michigan Avenue dojo into nearly 300 students taught by a dozen well-respected instructors at three different locations in downtown Chicago, the south side, and Oak Park.

7. Building the dojo. Funakoshi built and re-built dojos during his career spreading karate throughout Japan. He speaks of his students and benefactors literally helping him procure materials and build the structure. This, too, happened at Enso. I witnessed it when we moved to the current Wells Street location. Students packed up and cleaned the old dojo, unpacked the moving truck, painted walls, installed shelves, etc. Truly, it took a village.

8. Embracing karate. Throughout Funakoshi’s book, there are many references to the importance of embracing the spirit of karate with one’s heart and soul. He frequently recounts tales when he was proud to avoid using karate or ashamed to use karate because, to him and his instructors, mastering karate was just as much about this self-control and respect as it was about mastering kata and kumite. Certainly this spirit lives on at Enso, where respect and tradition have found their place from the littlest tikes to the most experienced seniors.

I’ve only trained at Enso, but my guess is that other great dojos also share a lot in common with Funakoshi’s story and legacy. That’s one of the things that’s so great about karate-ka and karate-do around the world: We share a commitment to discipline, respect, and self-improvement. Osu. 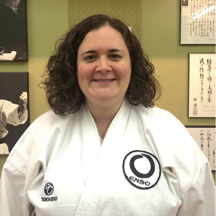 Katie Coleman is a 1st Dan student in Shotokan Karate at Enso.

Enso will host a self-defense workshop

is necessary. Instructor Linda Donner is a 6th degree black belt in Shotokan Karate and is certified in Krav Maga, the Israeli system of military self-defense. In this workshop, she will cover:

Join us! Register today and encourage a friend to attend this workshop with you! Don’t miss this opportunity to practice simple, effective verbal and physical skills for self-defense.